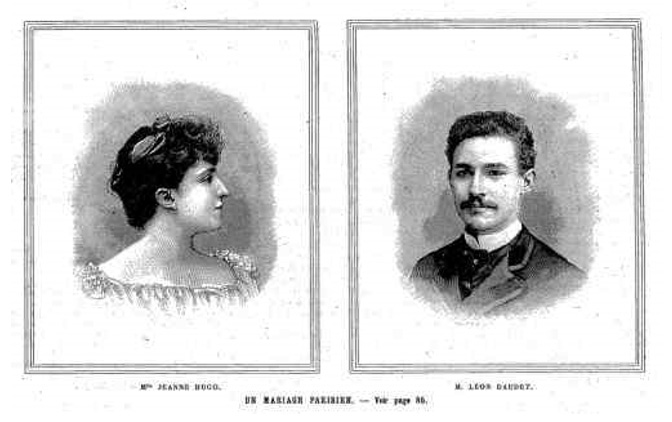 A London contemporary, commenting on the nuptial ceremony which took place in Paris on Thursday last at the Mairie of Passy, says: ‘Nothing was wanting on Thursday to lend grace and éclat to the nuptials of Mlle Jeanne Hugo, the great poet’s dearly loved little Jeanne who has now become Mme Leon Daudet! Or, at least, nothing save, perhaps, in the opinion of some, the strains of the church organ, and the ringing of wedding bells, which would not have been heard, had the ceremony not been a purely civil one.

Hugo is, by many Frenchmen, placed in the same rank as Shakespeare; and, whatever may be the views of Englishmen on this point, unquestionably the author of ‘Les Miserables’ is a man of whom his country men may feel justly proud. Therefore, the marriage of his granddaughter, who, with her brother, Georges Hugo, occupied such a large share in the poet’s heart, gave rise to an unusual amount of enthusiasm, and the hall at the Mairie, where the two young people were united, was filled with the élite of Parisian society.

Doubtless, had Victor Hugo been still living, he would have cordially granted his granddaughter’s hand to the son of Alphonse Daudet, the popular French novelist, the alliance being in every respect a desirable one. Moreover, a fact that promises well for the future happiness of the married couple is that, from all accounts, the two young people are in love with each other in the good old-fashioned way, their union not being, as is often the case in France, a matter talked over and decided by the wishes of their respective parents, without the wishes and the sentiments of the parties chiefly interested being consulted.’

The Paris correspondent of a London daily writes: – ‘I can remember Jeanne Hugo when, as a little girl, she used to trundle her hoop down Hauteville Hill in Guernsey. The Hugos were next door neighbours of ours; but I am afraid we had little respect for the poet, and made frequent nightly raids on his garden, which boasted the best yellow plums and purple grapes in all the island.’ Futher on the correspondent says: – ‘The marriage was a marriage d’inclinaison, but both bride and bridegroom are well furnished with the world’s goods. Jeanne has a dowry of £120,000, besides a large interest in her grandfather’s works, and young Daudet received form his father a marriage portion producing an income of £2,400 a year.’